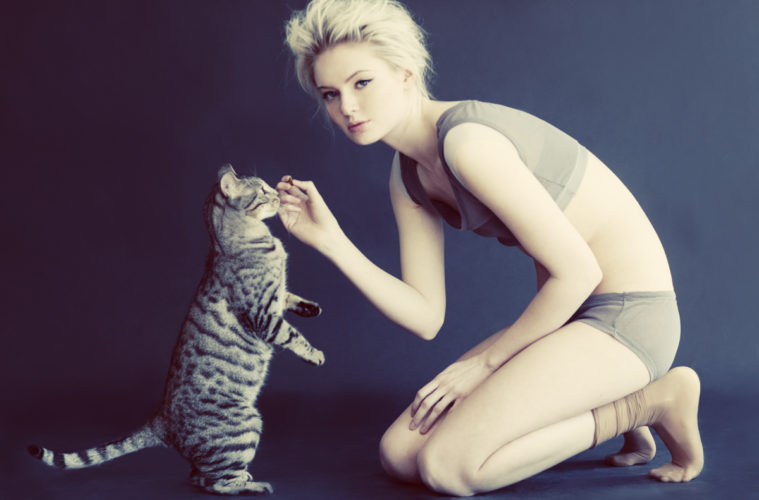 Fishing For The Cat

No one in my family is quite sane enough to act as a barometer of normality. We are rudderless, left to wander out into strange and unexplored territory, confused, bleary eyed and each pointing the finger at the other in an embarrassing display of mutual blame.

And so it was that Anna and I found ourselves traversing the streets of Oak Park, each wearing ratty pyjamas and Anna nursing gingerly a can of salt-free-sardines, open and with a fork sticking out.

Abbie is Mum’s cat. She is new and shiny and more important to my mother than her morning hit of caffeine. We had been forbade from allowing Abbie onto the dangerous streets of our suburb, rampant as they were with cars and mice and evil cat thieves.

‘You let her out!’ Insisted Dad as Anna and I stood before him, a mess of tears and panic. Mum had made the mistake of entrusting us with Abbie-watch, and under our lax supervision, she had disappeared and was somewhere out in the unforgiving, cat killing world.

‘But you’re the one who left the door open!’ My voice was shrill with fear.

More desperate accusations were hurled. Voices grew louder. Chaos engulfed the Horneshaw house as each of us squirmed to disqualify ourselves from Mum’s impending wrath.

In the midst of the anarchy, someone screamed ‘Sardines! Get the salt-free-sardines!’ I scrambled to locate the fish, Anna the tin opener.

‘WHY ARE YOU EATING SOME?’ I shrieked at Dad.

‘They’re good.’ He replied, and Anna and I stared back at him in bewilderment as we hurried to commence the expedition.

On the street behind ours, we were struggling to open a fortress like gate when a car pulled up to the house.

‘What’s going on here?’ Asked the owner as he exited the vehicle.

‘We’ve lost our cat and she’s black and gold and new and Mum really loves her and will kill us if we lose her and we think she might be in your garden!’ I explained.

Maybe it was the pyjamas. Maybe it was Anna hovering behind me, half eaten sardines in hand and worried scowl plastered to her face. But the man seamed horrified. He looked at his wife in silent warning to remain in the car.

‘Do you think we could please have a look in your back yard?’ I begged.

Apparently deciding that our story was legit, the man told us to hold on a minute and disappeared into the house. We waited in terrified silence. He returned looking solemn with no cat. As we thanked him, my brave exterior gave way to heaving sobs. Anna had frozen into a curious state of shock and was immobile, sardines held out in front of her in an offering to the Gods of cat salvation.

As we turned toward home, reeking of fish and failure, another man appeared in the distance. I could recognize that jaunty, self satisfied gait from a football field away. It was Dad.

‘What on earth are you two doing?’ He asked as if he hadn’t himself been immersed in the frenzy that had taken place minutes earlier. Clearly, he had found the cat.

That night, Mum returned home to the three of us sitting in uncharacteristic silence.

‘What’s wrong with you guys?’ She joked, pouring herself a glass of wine.