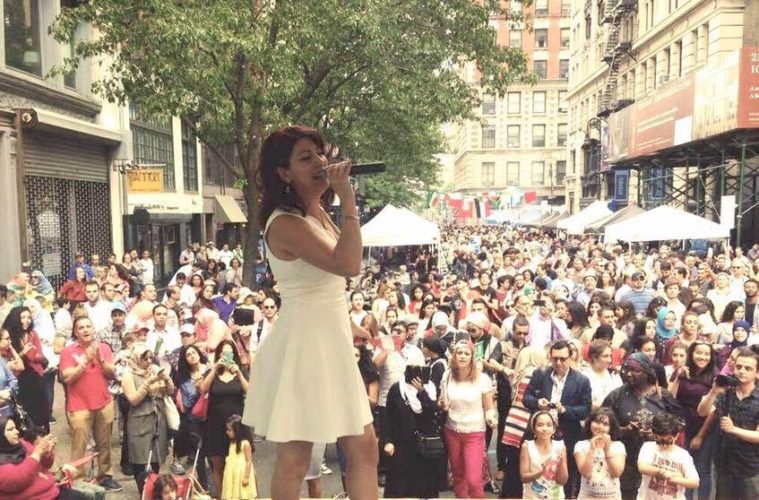 I met rising world music star Nadwa Rifai while she was gazing at the early morning cityscape from the penthouse of the Hotel Indigo. Casually dressed in black jeans and a tank top – her demure chic belies her vast accomplishments and international experiences that would fill more than a lifetime.

Beginning her musical journey from her student days in Beirut, Nadwa had travelled the world – finally settling in New York as her new home. Her background is as varied as it is interesting. Following a career in television production and journalism in Beirut and Boston – she is currently focusing her talents on developing a world music band: Nadwa and Her Ensemble. She is also completing her master’s degree in international relations – becoming a public figure, bridging the gap between different cultures with her unique experience of the world as a global citizen.

WW: Can you define world music? – It sounds really cool but people might not understand what it actually means.

NADWA: For me personally, it is music that blends many cultures—whether you’re talking lyrics or the music itself. So the music could be from many different origins; or the words, the lyrics, could be from anywhere. A song could be from Russia, or Croatia, one song could be in English, and another in Arabic. Considering my background is Lebanese I often sing in Arabic, which is my first language; but, I also perform in Spanish, and have learned a little Portuguese so I can sing bossa nova. Stylistically, my influences range from jazz standards, to bossa nova, and also flamenco. I perform songs in each of these styles according to their original language or tongue. What applies in my case is that world music involves compositions of different cultural, indeed, ethnic origins. But, also, in singing in different languages, I reach out to different kinds of people. At the same time, I blend music that I find equally appealing to people from different cultures. Like an ambassador of music…

WW: What prompted you to move across the globe from Beirut to New York?

N: Experience – change of vision – love, etc. I am, actually, a quite cosmopolitan person having traveled to and from major cities like Beirut, Vienna, and New York. When I first moved to US, I settled in Boston, where I began exploring music with the band Atlas Soul, contributing to the writing and vocals. For one composition I wrote Arabic lyrics that blended with those of a French poet – creating something utterly unique. My song with this band won awards in the states. It won the global rhythm magazine and was featured on the compilation CD, which was distributed as 150,000 copies on the CD.

When I moved to New York City I became more serious, more focused on my own band. At that point I knew what I wanted so it was very different: I wanted a world music band with a jazz flavor or twist.

WW: Do you have any artists who have directly influenced your music?

N: Throughout my life, yes, of course. When it comes to jazz I am a big fan of Mel Torme—he’s amazing. I also like Nina Simone. I listen to a pretty wide variety of music. I listen to classical music – sometimes at home and enjoy listening to Mozart, Beethoven. I just really love the music. Sometimes I get into the blues, other times flamenco, and also the Gypsy Kings. Lately, I have become a huge fan of flamenco. It takes my heart to different dimensions. Bossa nova—mostly artists like Astrud Gilberto and Bebel Gilberto. I find their music very soothing and relaxing. Bossa nova is so smooth – it’s just impossible for anybody not to like it. I feel like it’s the kind of music that needs no passport – a music that is an international language.

And, of course, one of my most important and indelible influences is the Lebanese songstress – Fairuz. Fairuz brought Arabic song and poetry across the seas to stages across the globe. In a way, she paved the way for me – providing a kind of guiding star in my journey into the international scene. In my approach to world music, I have sought to echo the tone, beauty and poetry of Fairuz’ music while blending other music traditions like flamenco, bossa nova, and even North American jazz standards in songs like “Fly Me To The Moon”.

WW: You’re also getting a Masters degree in International Relations, tell us more about that…

My interest in international relations follows from my experience in journalism. I persued television journalism in Boston and in New York and even worked with television in the UN. Indeed, I was a television journalist in New York – and had my own show for a time. However, my goal at this point in my life is to keep a balance. I enjoy being a singer, but everything I’ve done so far in my life, I am proud of—I’ve worked hard to get where I am.

I like to keep a balance between all the things that I do. I feel that all these things – journalism, world music, and international relations – are related. If you are a journalist you need to know how to talk about something, you need to know how to understand it fully. If you’re an artist, you need to feel and express it fully. In international relations you also need to have knowledge of culture and history and be able express yourself clearly across different cultures. But you also need to have empathy – to finally be able to feel the content of a people’s emotions especially as expressed through art and music. Mind and heart…

WW: A balance, kind of like a yin and yang…

N: Yes, they complement each other, so you have to acknowledge what you’re doing, enjoy and love it.

International relations has opened many doors for me. I am meeting people form the UN, different consulates, different parts of the world. It’s a gratifying field.

WW: You’ve obviously made it in the industry – you’ve come to New York from Lebanon and made your mark, people are noticing and you’re a public figure in a way. So do you have any words of wisdom or advice for anyone from the younger generation who is just starting out? What would you recommend they do as per your experience?

N: I would say be loyal to what you love; be persistent, and don’t get distracted. If you really love something be focused and work hard on it. There are so many things going on; it’s a big city, and you’re going to meet all kinds of people. You have to be strong enough to use your judgment and stay focused. Don’t let the little things distract you, there is a party scene here – but more importantly, for your development as an artist and a person, you need to acknowledge that there is also a professional scene. To be sure, you can benefit from the many creative social scenes NYC has to offer. Just be serious about what you’re doing, be focused and put your heart and your mind into it. I guaranteed you; you will reach your goal. But, also, honestly – one never knows. I didn’t know how things would end up for me; that I would lead a highly respected world music ensemble while honing my skills in the world of diplomacy and international relations. You need to find meaning in what you are doing, first, and then build on your accomplishments. Eventually, things fall into place.

WW: Tell us what is coming up next for you…

N: All I can say is I am not Stopping!