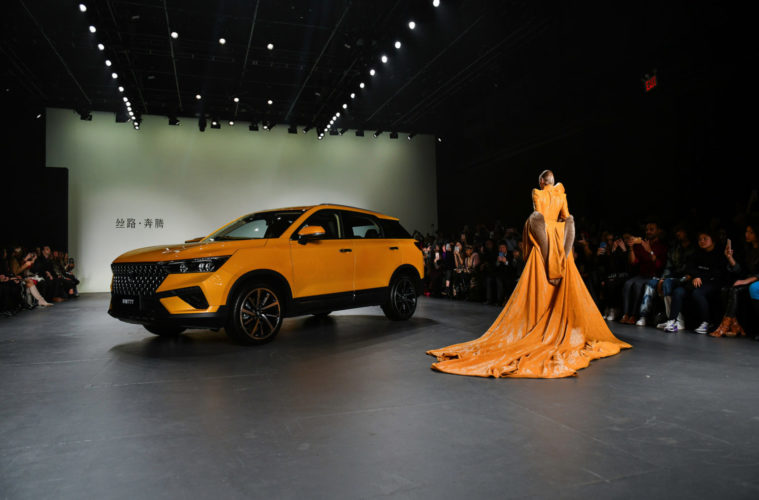 Lauren karavelisMarch 2, 2020
CulturefeaturedStyle18 Comments 18
My first fashion show during NYFW was Sheguang Hu’s A/W 2020, unparalleled the best one of it’s kind.   This international Chinese-Dutch designer was recognized for his bold and electrifying sense of style as well as his imagination in his collections.
Some trends that were present were: hexagonal multicolored snakeskin patterned prints throughout multiple product categories, sequined capes with voluminous larger than life floral motifs on the shoulders or down the bodice, some faces/hair painted white to embody mums, tonal monochrome dressing, two tone fur coats, and sculptured black and ivory shaped collars were walking the runway this season.

Hu made it clear that this runway show with his myriad elements of science and technology was born from that “love at first sight” philosophy.

The designer’s inspiration behind his stunning creative presentation at Pier 59 came from his love and appreciation for the Chinese culture and Silk Road. Bestune T77 was also a heavy influence at the show for yellow SUV’s were stationed in the middle of the stage to demonstrate how industrial design intergrates with clothing in such a way that should inspire young Chinese consumers to purchase automobiles alongside his collection now more than ever that we have entered a new decade.
“The amazing appearance of Bestune T77 caught my eye, the beautiful color and high-end modeling of the car, the details pertinent to a Chinese culture and it’s Guochao fashion theme touched me significantly” says Hu. Hu made it clear that this runway show with his myriad elements of science and technology was born from that “love at first sight” philosophy.
The designer and his nothing short of amazing production staff brought unexpected surprises to his audience constantly throughout the show like supermodel Carmen Dell’Orefice accompanying the designer himself at the start of the production who began her career by appearing on the cover of Vogue at age 14. She was adorned in elegant Chinese red lace silk cheongsam that the designer personally designed for her to wear to the show.