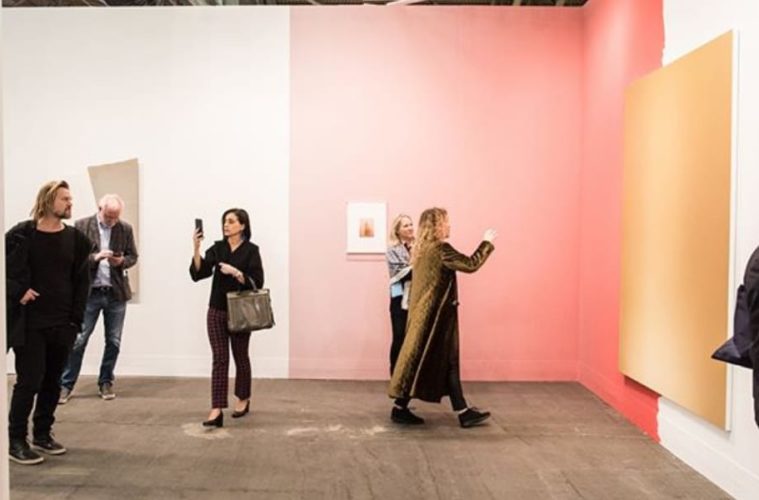 The first weekend of March in New York City is usually the art world’s annual equivalent of Oscar weekend. Now known as Armory Week, a multiplicity of large-scale art fairs are concurrently held across the metropolis, giving all manner and number of creative professionals from all over America and the globe their chance to shine and hopefully attract the notice of high profile curators, dealers, and collectors. The flagship fair is, of course, the Armory show, so named in homage to the legendary 1913 Lexington armory exhibition that introduced the USA to modern art. In 2019, 198 exhibitors showed at the Armory, hailing from 33 different countries, 59 of those for their first time at the event.

Held on the west side piers since 2001, this year’s Armory show hit a snag shortly before its scheduled opening when Pier 92, one of the fair’s usual showplaces, was ruled unfit for use, necessitating a spatial rearrangement. As a result, the fair’s usual division of showing modern and contemporary art separately could not be done this time around. Thus, Pier 94, the space devoted to gallery displays, featured a mixture of works spanning many decades, some dating to before World War II, which in this writer’s opinion perhaps harmed the new works being unveiled by not allowing them a unique environment where they could be appreciated solely on their own merits. 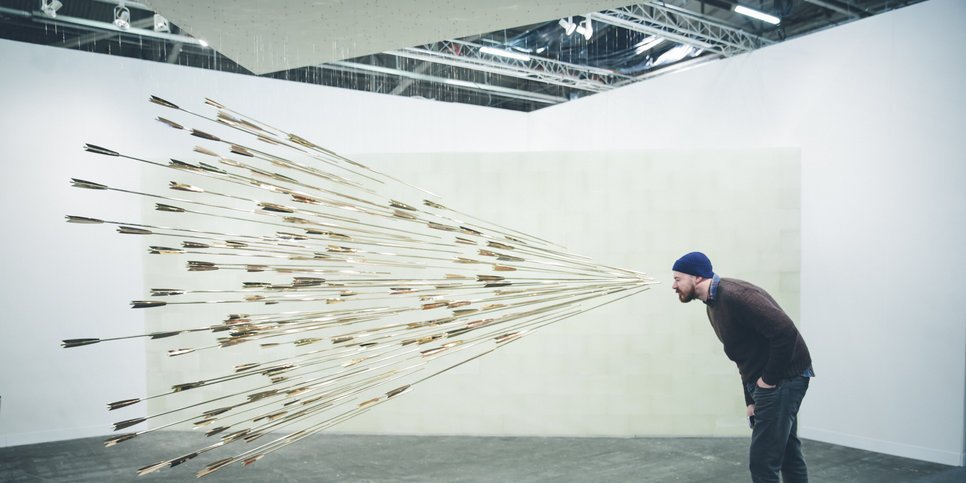 If a trend could be identified at all at this year’s Armory, it would have to be the prominence given to African artists, and works concerning post-colonial and nonwhite identities in general. Despite the presence of a number of installations, the works featured were overwhelmingly paintings, along with some sculpture, mostly masks and a few busts. I sensed a general atmosphere of somber and ashy imagery, punctuated intermittently by bright exhibitions whose presence amid the general background made their colors just that much fuller and striking.

The flagship work at the center of Pier 94, which probably became the focus of thousands of social media selfie posts, was Cameroonian artist Pascale Tayou’s Plastic Bags; a giant, colorful installation consisting of a large mass of the title material. Meant probably as a critique of consumerism and environmental degradation, the piece connotated an unintended irony being at the heart of one of the most well-known social events for the privileged class. 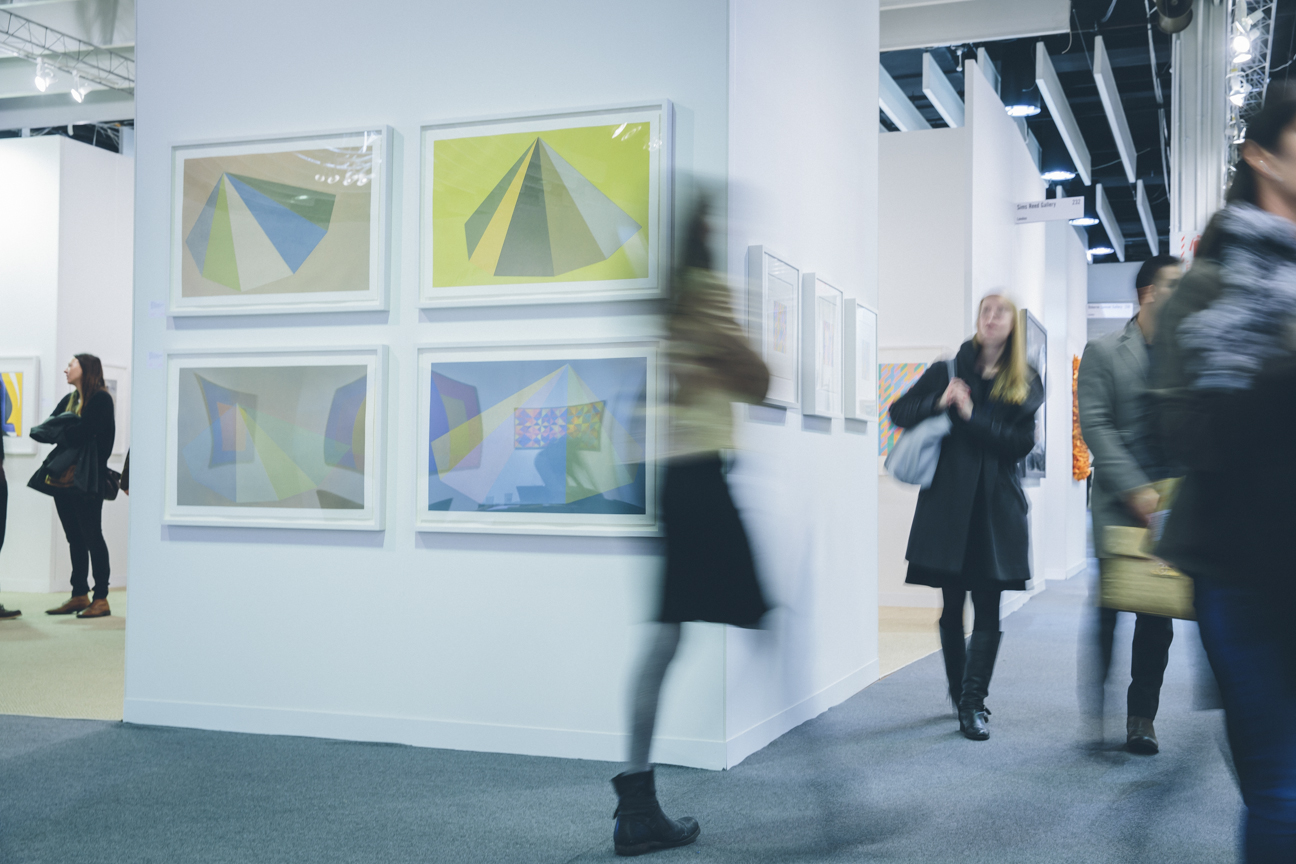 Directly facing Plastic Bags was a stunning series of Ai Weiwei’s Zodiac works, made from Legos, which deal with a sensitive subject in Chinese history, the XIXth century pillaging of natural treasures by the British, and are hence a reaffirmation of national cultural identity.

Another installation that gathered much buzz from fairgoers was the simulated starscape placed in the connecting pathway between Piers 94 and 90; Exploded View (Swimmers) by Jim Campbell. While I’ve seen other LED installations attempting to replicate astronomy, this one was expertly crafted and evoked an emotional response in almost all who walked through it. For myself, it made me think of how, in the postmodern light polluted urbanity, art is perhaps the closest one can approach nature.

The booths that I appreciated the most included: London/Venice based Victoria Miro Gallery’s mélange of old and new, including a selection of works by the 1990s Young British Artist Cris Ofili placed alongside recent oeuvres by Celia Paul and a 1954 piece by Alice Neel that all effortlessly go timelessly together; South African Jody Paulsen’s brightly colored felt paintings for Cape Town’s SMAC Gallery; the luscious colors of Cameroonian Ajarb Bernard Ategwa for London’s Jack Bell Gallery; the Asian contemporary selection offered by Singapore’s Pearl Lam Gallery; and, my personal favorites, Louise Bonnet’s exaggerated surrealist-inspired drawings of nude women pursued by snakes and shooting milk from their breasts for Los Angeles’s Nino Mier Gallery, works that play with and help question accepted notions of feminine sexuality.

The selections displayed in the fair’s “Focus” section, on Pier 90, to me seemed to not offer much of a contrast to what the regular exhibiting galleries were presenting, the theme of identity as perceived through the body appeared to me to be more than adequately dealt with already. What did strike my mind from this area was DAG’s culling of 1960s and ‘70s modernist paintings by Indian artists done in New York, who were under the sponsorship of the Rockefeller fund. This is definitely a lesser researched chapter in twentieth century art history, and I was glad to see this booth giving these works a belated retrospective.

I was a bit disappointed that there was not more of a presence given to digital art and virtual/augmented reality works, which in the coming years are going to compose a larger and larger share of the art sales market. The only noticeable digital booth I saw was one presented by South Korea’s Gallery Hyundai of videos from the 1990s by Nam June Paik, who is an influential figure in this genre. Minimalism and light installations had a small presence, by my count just one booth reconstructing a prominent installation from the 1960s (Archeus/Post Modern), which perhaps was an underrepresentation considering the importance of these media over the past few decades.

All in all, this year’s Armory was a distilled, encapsulating microcosm of the international art scene as a whole, with the trending aesthetic and political themes of today strongly at the forefront, but little experimentation or true innovation that I saw. According to news reports I’ve read, sales and attendance were good, so next year’s fair can be expected to feature at least some more of the same, but I would hope that gallery directors and curators will think perhaps a little more out of the box, next time round.