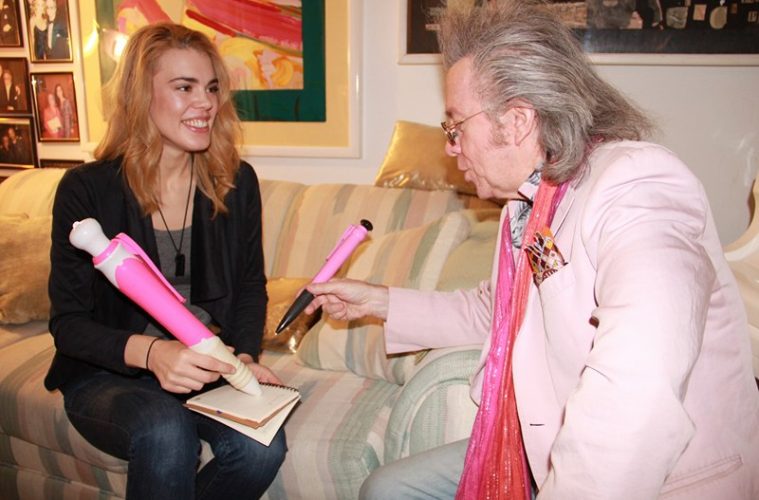 You don’t forget first meeting Jeffrey. I met the “doctor of comedy” in a celebration for one of Manhattan’s social fixtures and sometime Hollywood actress, Allison Woodward. Sitting on the sofa was a man wearing little round rose frames with electric hair bursting up in every direction. That eccentric looking fellow, happily observing the antics of the night, was Jeffrey. Recounting as I was told “famous comedy writer” Jeffrey Gurian’s reputation preceded him.

It’s no wonder with an extensive career lasting decades writing for some of the biggest stars in comedy including Rodney Dangerfield, Joan Rivers, George Wallace, Andrew “Dice” Clay, Richard Belzer and Gilbert Gottfried. As the only medical doctor with a career in comedy, Jeffrey has truly made his own path.

‘Jeffrey delights in making the ordinary and mundane in his home into his happy place.’

Now celebrating the launch of his fifth book, I was happy to have the opportunity to sit down with this Renaissance man in his Manhattan bachelor pad filled with oversized pens, balloon soup on the stove and growing spoon plants. Jeffrey delights in making the ordinary and mundane in his home into his happy place. Besides all the comedic decorations, I was immediately hit by the walls of fame, pictures of himself with Hollywood and comedic elite spanning the decades, lining the hallways of his unique apartment – complete with a white baby grand.

As a regular on The Bennington Show, Jeffrey was described as the only comic that has spanned from the golden age of comics right up to the MTV generation. With so much to say, Jeffrey divulged the following and more:

B: What has been the highlight of your illustrious career in comedy, on a personal level?

J: Being the first to be pranked with “Too Much Tuna” by Nick Kroll and John Mulaney on Comedy Central’s Kroll Show, which quickly went viral, was a major highlight. It was amazing to be on their show alongside Amy Poehler and Katy Perry in her comedy debut.

What made this such a special moment in your long career?

Kroll and Mulaney are about the biggest, and hippest young comedy stars in the biz and for them to want to do that for me is truly amazing. Nick Kroll says in one of my videos that “no one has more access to people in comedy than me!” And both of them have been so kind to me. It’s truly amazing. Wherever I go young people yell out to me “Too Much Tuna.”

Furthermore, I had the pleasure of attending the Broadway opening of Kroll and Mulaney’s hit show “Oh, Hello”. You can see us on the red carpet with me wearing the custom jacket they had made especially for me with “ Gurian Angels” written on the back. An exact replica of the Guardian Angels jacket!

How do you explain to people the need to do many different types of work and not be pigeonholed into one career? Particularly before you “made it”?

Some people just have a calling.  I could never make up my mind which field I liked best so I had no choice but to do both.  And anyway I couldn’t get a job as a waiter… so I became a doctor!

What is your new book about? Is it in line with your previously published works?

This new book is one that I am very proud of and is somewhat of a departure from previously published books. It describes and contains practical information on how to integrate the STAR therapy method into daily living.

What is STAR therapy for those of us not familiar?

STAR stands for Spiritual, Transformational, Affirmative Resonance Therapy, which is a very gentle system of talk and touch used to treat stress related ailments such as migraine headache.

Sometimes the thoughts and belief system we have don’t work in our favor. I used this simple fact to cure myself from my severe stutter many years ago… Since, I have developed this therapy for others suffering from different ailments of a similar origin.

I even lectured on STAR therapy at NYU school of dentistry, thanks to my 12 years there working as a professor. Additionally, I’ve been on the Board of The Association For Spirituality and Psychotherapy since 1999; energy healing is a longtime passion of mine and a skill I have cultivated over the decades.

If you had to choose one take away for our readership, from your new book, what would that be?

If you have a goal, NEVER give up.  Through the power of thought and intention you can manifest almost anything you desire.

How do you hope this book effects people?

Everyone deserves happiness. It’s really all anyone wants. I’m hoping that this book will guide it’s readers in how to think in order to lead their lives in a different way that will allow them to achieve this. Happiness is out there for everyone.

How has your personal energy/persona changed throughout the years?

My Healing powers have only gotten stronger through the years.  And my Spiritual connection is what guides me on a daily basis.

How do you take your coffee?

Only had one cup of coffee in my life.  My first night of college, I asked my Mom to make it for me because I thought I had to!  I hated it and never had it again!

For more information on Jeffrey and to see the “Too Much Tuna” video, please visit http://www.comedymatterstv.com